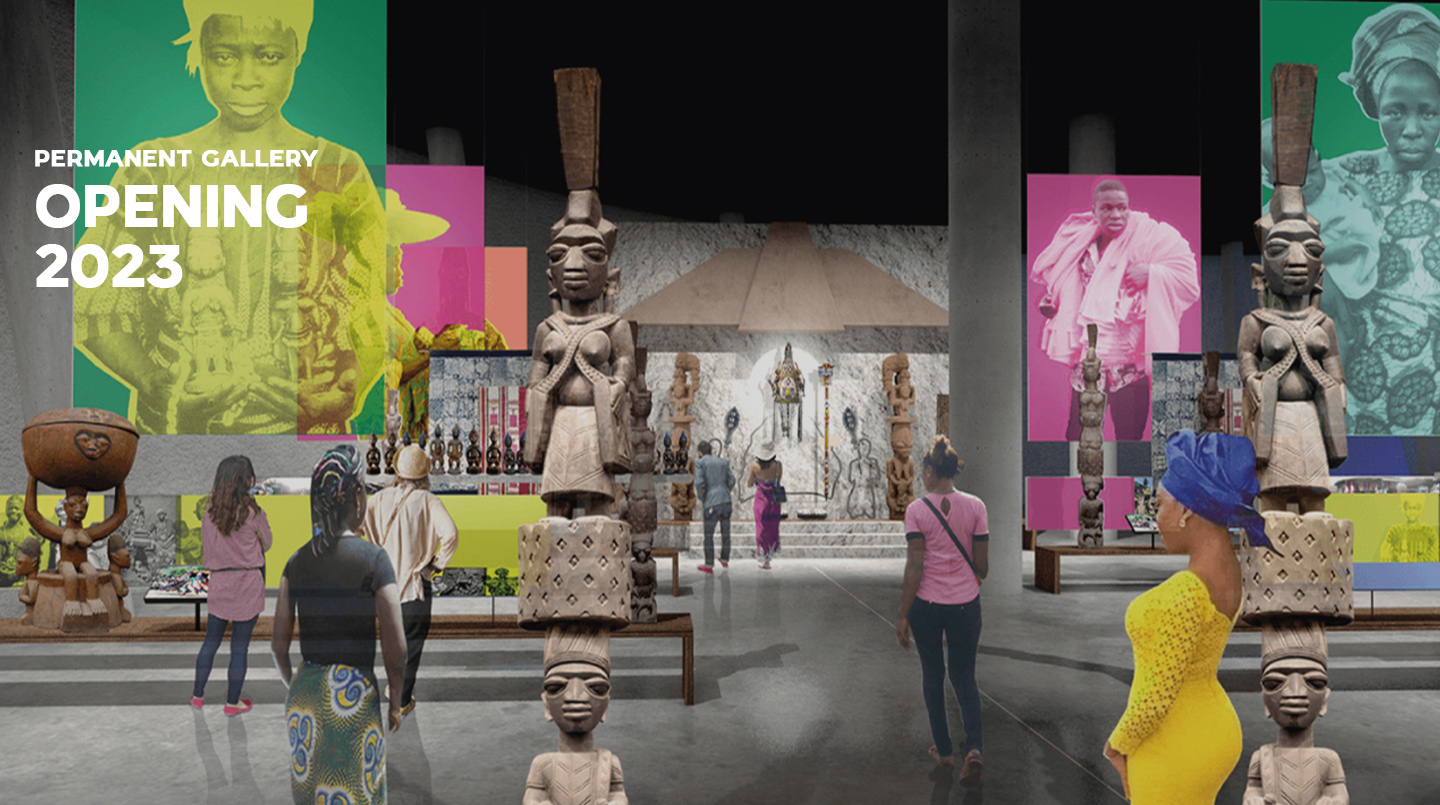 The new John Randle Centre will be anchored by a museum that hosts a dynamic, world-class permanent exhibition about the history, traditions, and future orientation of Yoruba. It has been informed by a group of curators determined to reflect the liveliness and energy of our culture.

Complementing this will be temporary exhibitions that change every six months, on a variety of topics. Live events – whether performances, lectures, recitals, conversations, or any other format – will ensure that the Centre is a living, breathing part of the Yoruba and Nigerian cultural scene.

While the exhibitions are still in their final stages of development, please explore some of the artistic impressions in this section, which give some flavour of what’s to come. 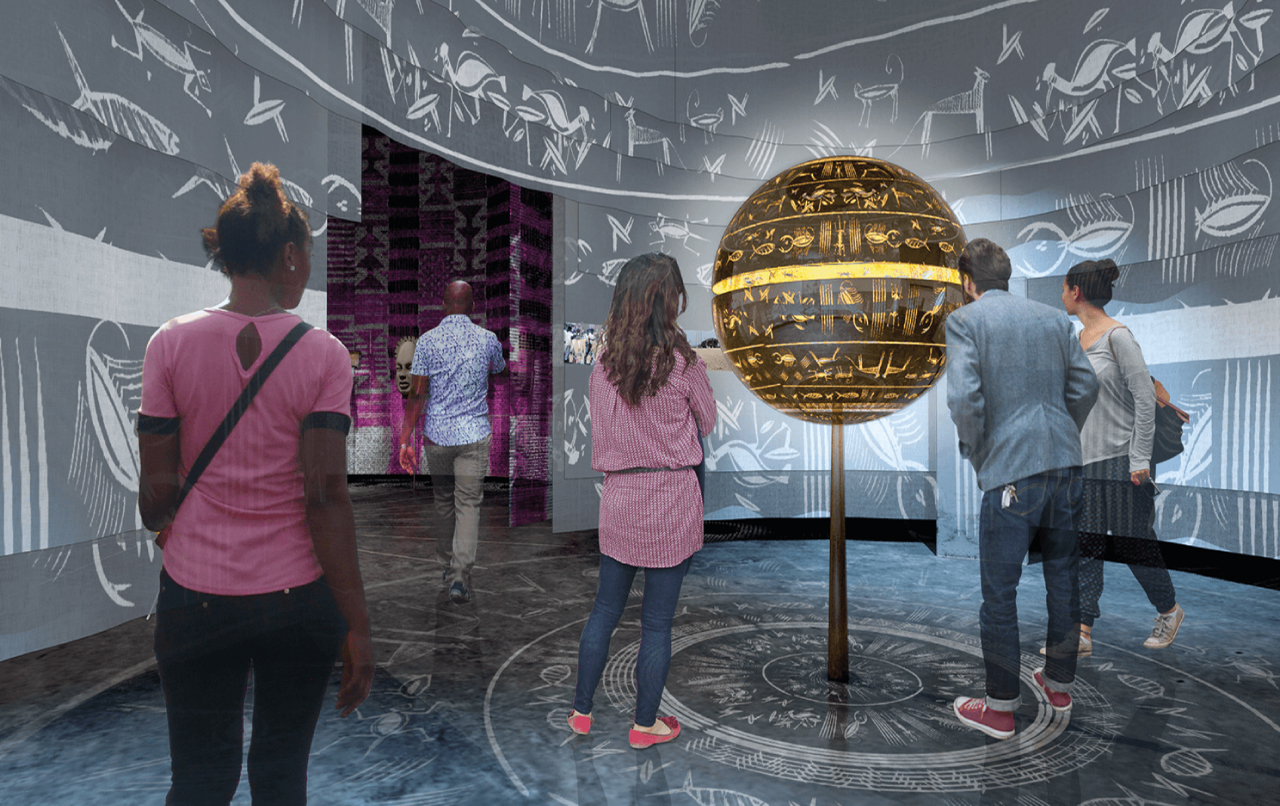 The Beginnings story introduces the visitor to one of the most important facets of Yoruba culture and history: the creation myth. A dark but dramatically lit space contains a spot-lit calabash in two halves, symbolising the heaven and the earth. Suspense is built up through audio of chanted oríkì describing the moment the world was made, intensified by the sound of humming and thunder. Gauze curtains enclose the space, emphasising the contrast between the emptiness before the world began and the abundance of life, movement, and sounds that follow after the world begins. 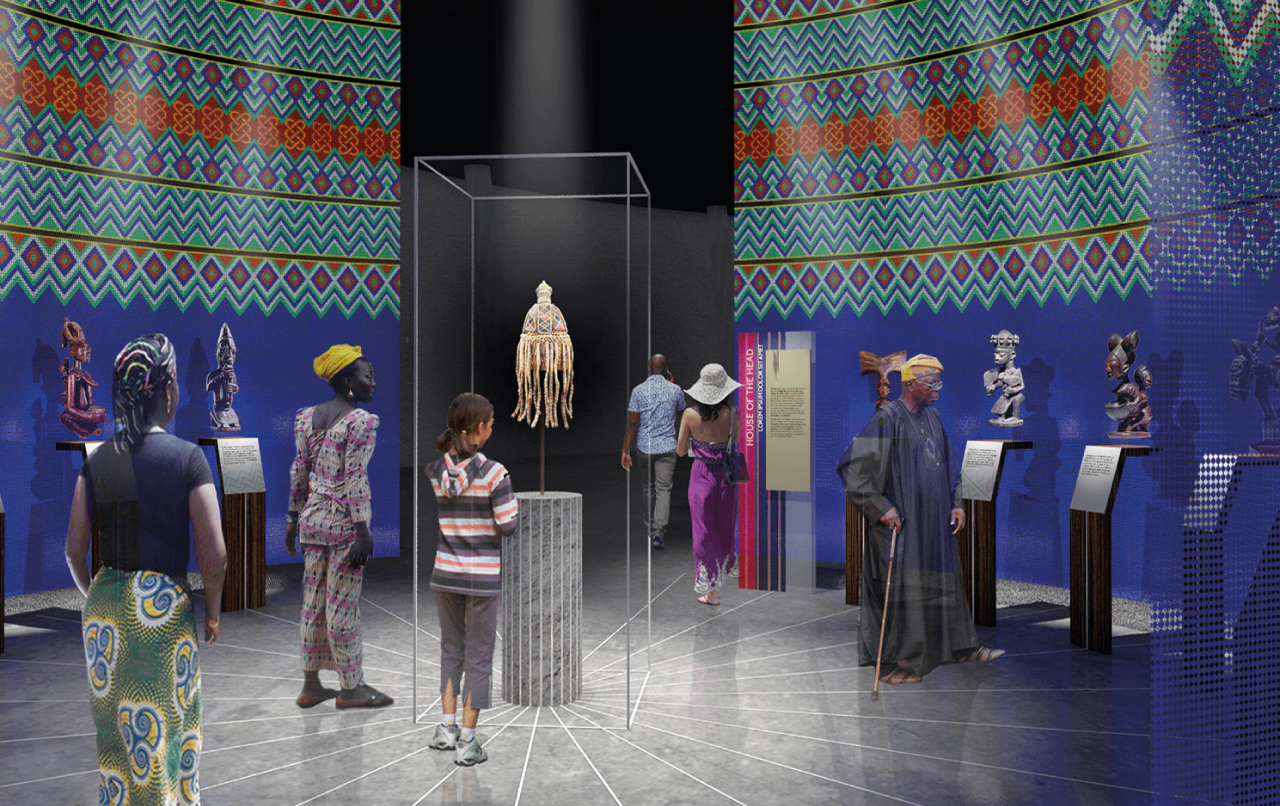 Beginnings — House of the Head

A House of the Head, or Ile Ori, sits beyond the opening sequence, surrounded by fifteen òrisà shrines that interpret the pan-Yoruba deities any Yoruba visitor will recognise. Focused interpretation describes how Ile Ori symbolises the relationship between one’s individual character and one’s spiritual being, and explains the role of each òrisà in Yoruba culture. The philosophical concept of àse—given by Olodumare to all things in existence—is also explained. 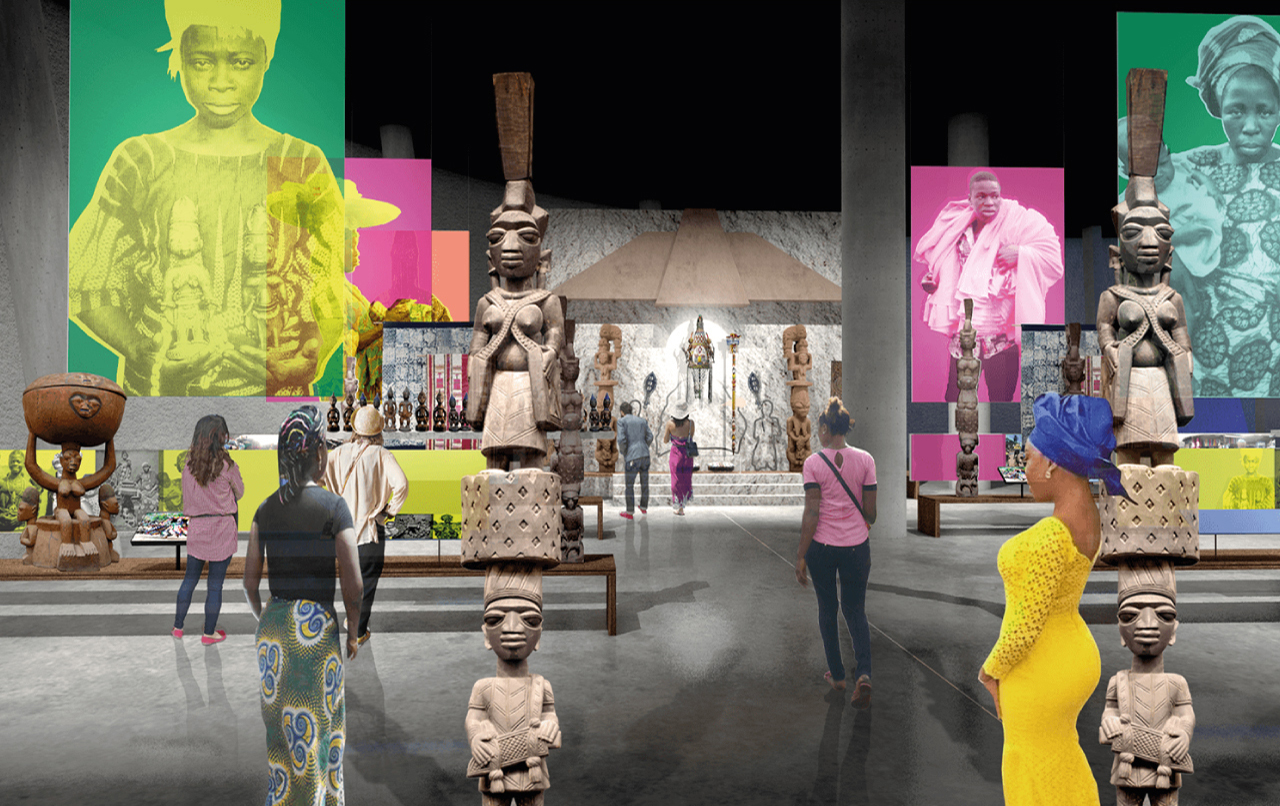 Custom and Practice opens with the first ritual anyone of Yoruba heritage will experience in their life: the naming ceremony of a newborn child. A digital interactive encourages visitors to input their Yoruba name to unpack its significance and meaning, while an eye-catching wall of Ibeji twin sculptures introduces the visitor to Yoruba fertility ceremonies.

Following on from naming, the story of Sacred Authority – the practices of kings and their kingmakers – is explored through key objects that reveal the rules of the palace and the king common to any Yoruba town. A marketplace display opposite Sacred Authority describes the evolution of fabrics, foods and hierarchies in a Yoruba market. Adding to the dynamism of an archetypal Yoruba town, a floor-to-ceiling video wall will show footage of masquerade festivals from across Yorubaland, alongside costumes from different Yoruba festivals, as part of a multisensory exhibit.

The onset of colonialism in the 19th century, and the slave trade that accompanied it, is then encountered through key objects such as colonial era gin bottles, bibles, manillas and arms. A key attraction will be carved doors that tell the story of the British occupation of Lagos. Through this display are glimpses to the content in Modern Yoruba, establishing links between enforced slavery and the history of the Yoruba diaspora to come. 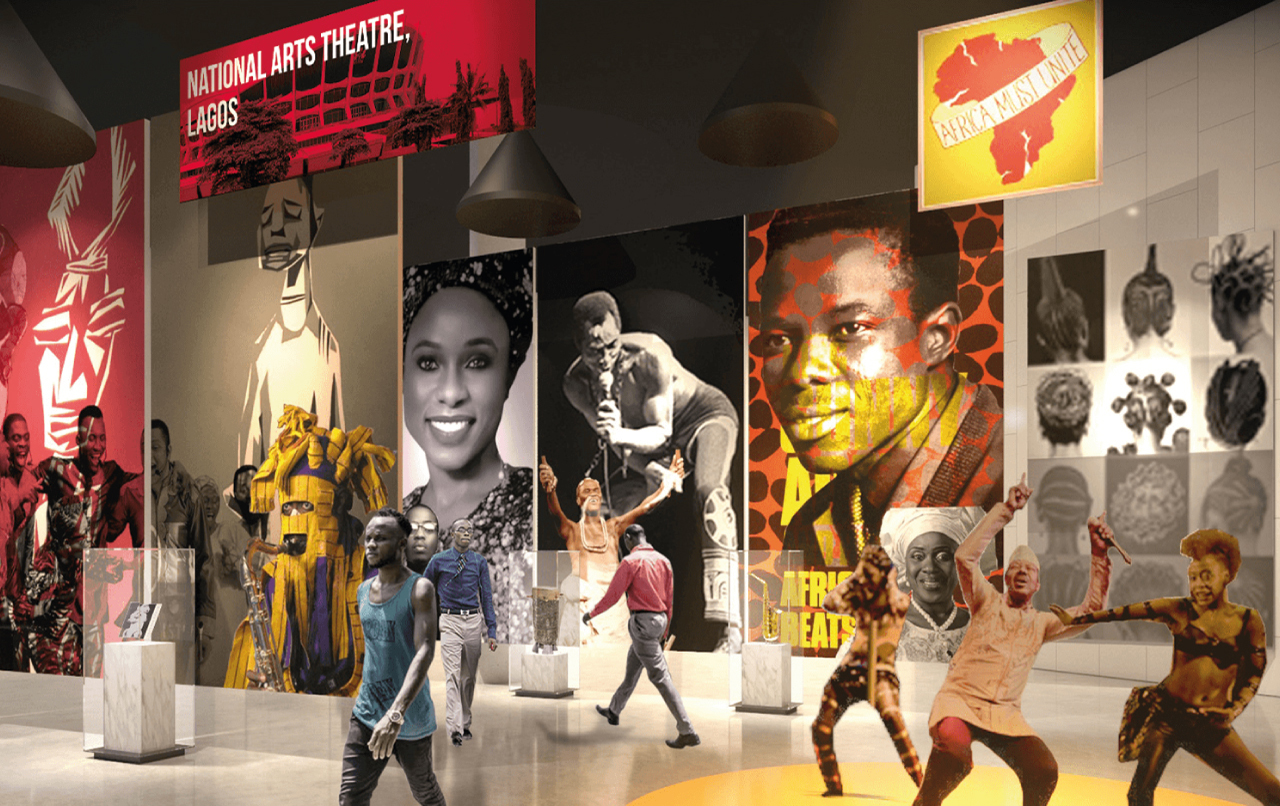 In Modern Yoruba, visitors learn that Yoruba culture changed and modernised in post-independence Nigeria. In a theatrical cityscape that evokes Lagos’ infrastructure, the works of twentieth century Yoruba icons from music, politics and literature are explored through the Yoruba traditions that inspired them. Audio points allow visitors to compare Yoruba drumbeats to music by Fela, King Sunny Adé and more, while great Yoruba works of literature are interpreted through Yoruba mythology and cosmology. The story of modern fashion is told through a display of popular fabrics, from lurex to lace, and nearby a section is devoted to Osogbo Grove, and the history of its journey from neglect to transformation. 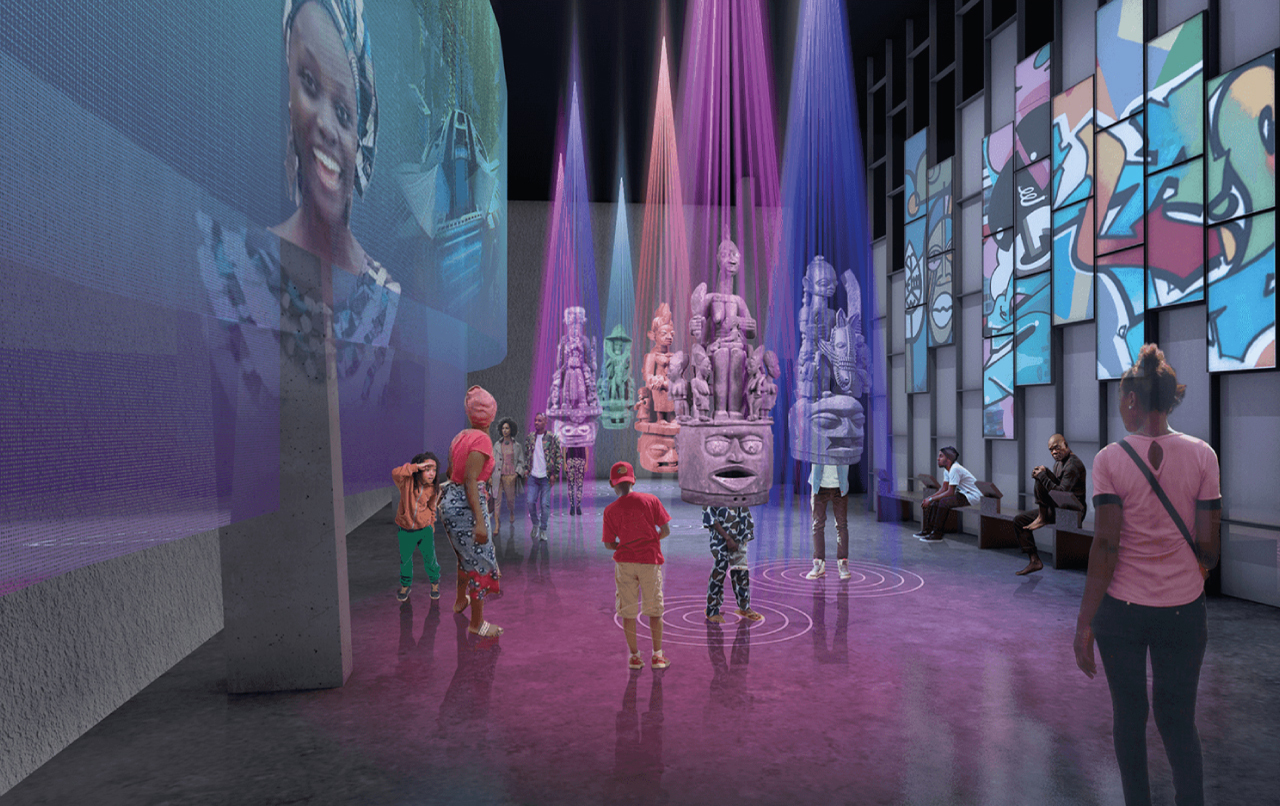 At the end of the visitor journey is the Future Yoruba area, a temporary exhibition space that will host innovative art from a mixture of home-grown Lagosian artists, and artists from outside Nigeria. These artists will be responding to the themes and questions provoked by an essay by Wale Lawal entitled Àìmàsìkò, which imagines the future of the Yoruba from the perspective of a lost Ife bronze head. Please click to read a short summary of Àìmàsìkò. 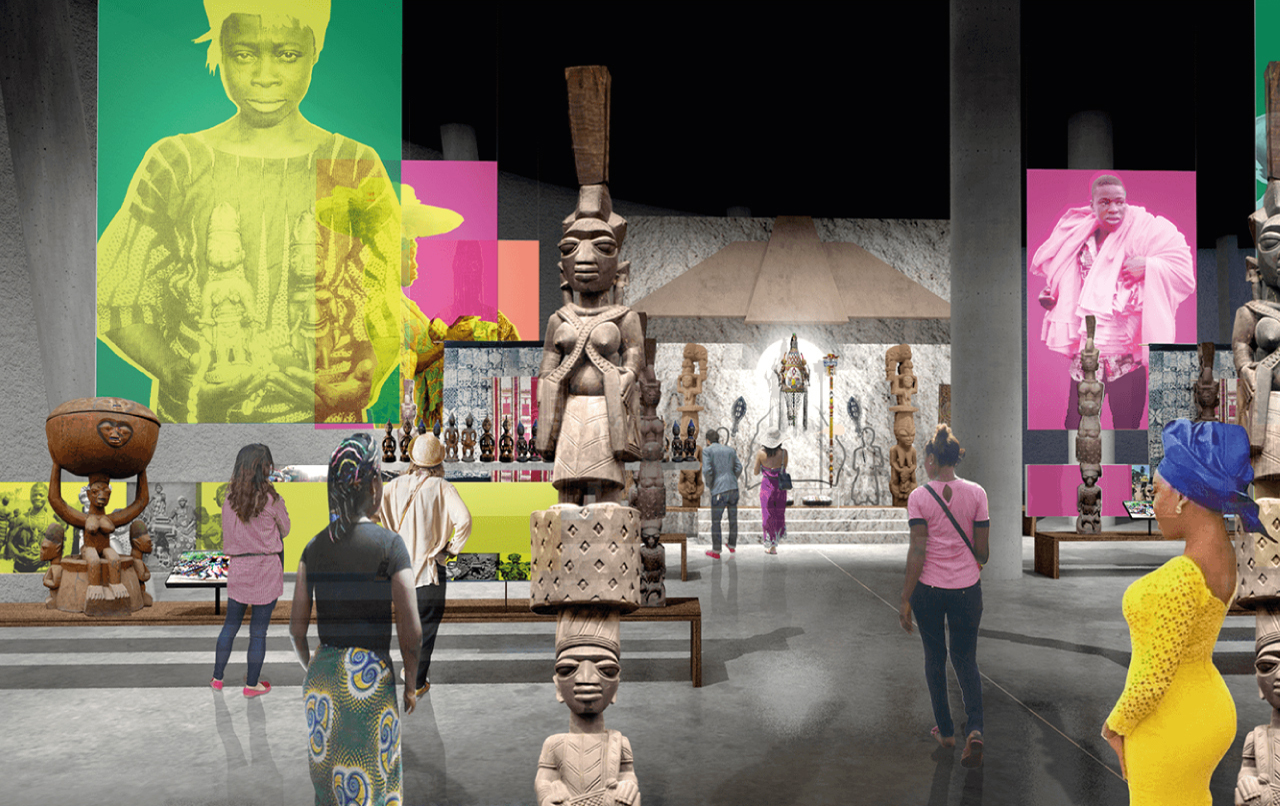 Development of the Permanent Gallery

‘What follows six is more than seven.’

‘Our tradition is a very modern tradition.’

The John Randle Centre is the first museum of its kind in Africa. It is designed to allow you, the visitor, insight into the culture and society of the peoples that call themselves Yoruba, whether in Nigeria or from around the world. The Centre developed from an opportunity to regenerate the historic site of the JK Randle building, initially commissioned by Randle, a successful and prosperous doctor of Yoruba heritage. In doing so it led the Lagos State Government's initiative to make Onikan the centre of Lagos’ cultural district. Read more…