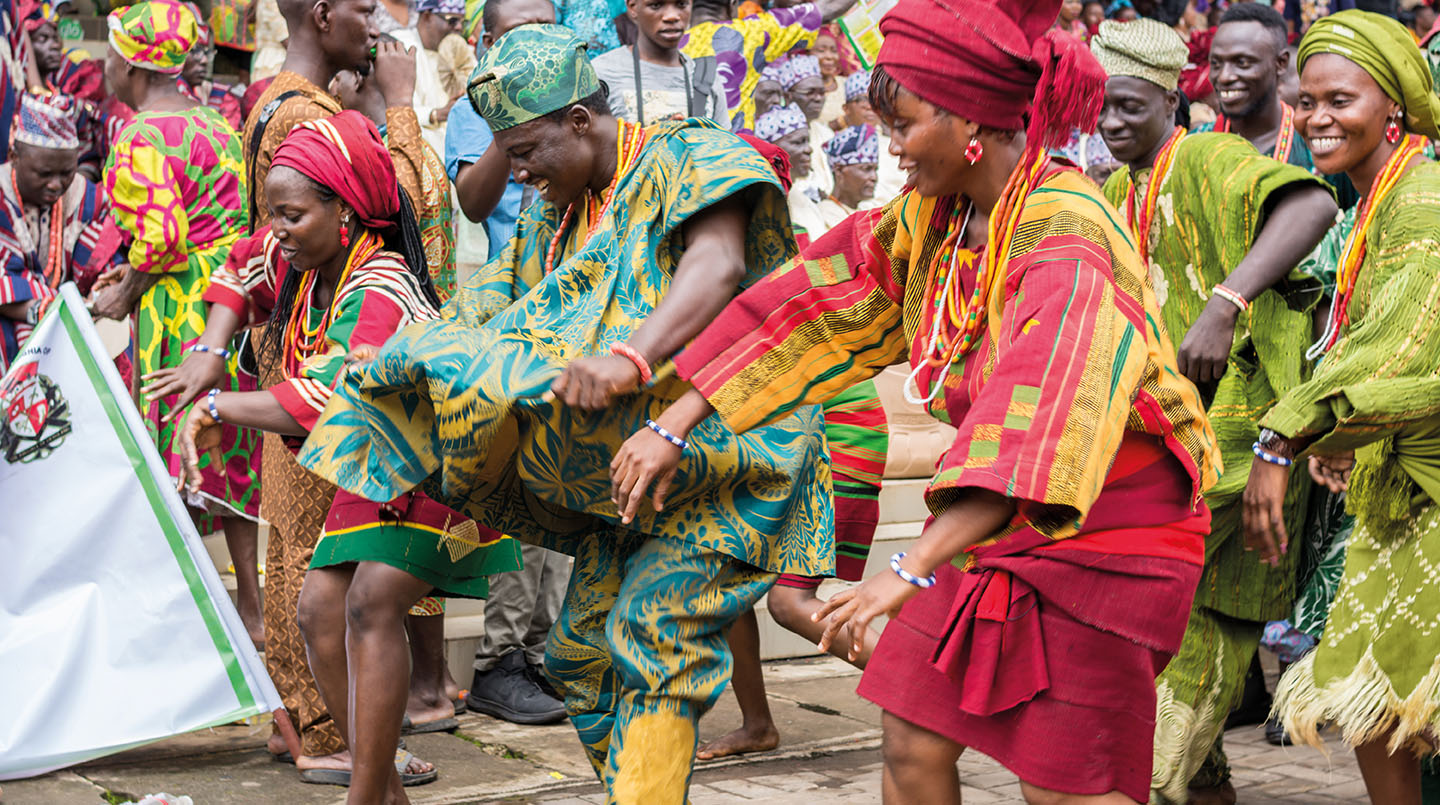 “The John Randle Centre is the first of many initiatives aimed at the preservation of the heritage of the Yoruba through the celebration and preservation of history and culture, the regeneration of decades old public green space, public recreation facilities, and the restoration of civic pride. Onikan will be the catalyst for a vibrant and tourist friendly quarter in the heart of Lagos Island.” 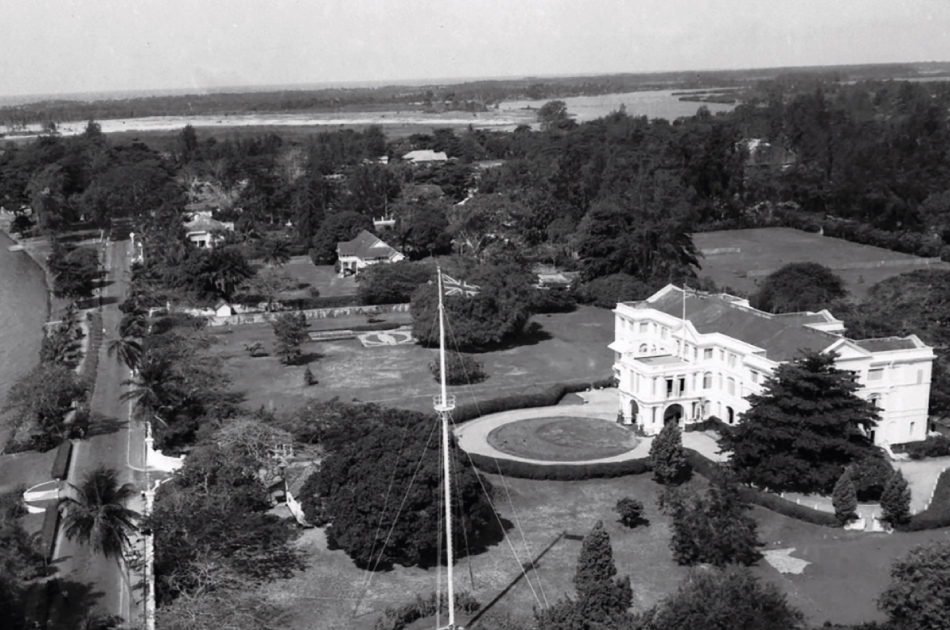 The History of the John Randle Centre

Dr John Randle, a prominent Lagosian, built a public swimming pool in 1928 in King George V Park, later to become the Love Garden- a much loved recreational area. This grand gesture was inspired by the refusal of the British Colonial Office to build a swimming pool for Lagosians to learn how to swim. On completion of the pool and garden, Dr Randle handed over the facilities to the Lagos Town Council with a maintenance purse to ensure its upkeep.

On the 1st of February 1855 in Regent Town, Sierra Leone, John Randle was born to Thomas S. Randle and Sarah Randle. Thomas Randle originally hailed from Oyo, in Nigeria. He was among so many uprooted and displaced people transplanted to Sierra Leone in the early 19th century due to the general upheaval and destruction created by the intra-tribal wars of that era.

John Randle had his early education in Regent Town, and then attended the CMS Grammar School in Sierra Leone, and in 1874 enrolled as a student dispenser at the Colonial Hospital in Freetown. After John Randle had qualified as a Dispenser, he was sent to the Gold Coast (now Ghana) on an assignment as a Dispenser and Public Vaccinator to vaccinate the people during an outbreak of smallpox.

In 1884 John Randle left for Edinburgh, he enrolled at the prestigious University of Edinburgh in Scotland where he had formal medical training between 1884 and 1888, graduating with a gold medal in Materia Medica. He returned to Lagos in 1889 and was appointed an Assistant Colonial Surgeon in the Lagos Colonial Hospital.

Dr. Randle was the 4th qualified African medical practitioner in the colony. He had a turbulent career in the colonial service, and never backed down on his rights. Dr. John Randle fought for the same rights and benefits that the British doctors enjoyed. He subsequently left theColonial Service to set up a flourishing medical practice in the Colony ofLagos.

Free from the control of the Colonial Service, Dr. JohnRandle had time to indulge his passion in politics. He earned recognition as one of the leading exponents of native public opinion in Lagos. In 1899, Governor William Macgregor made him a provisional member of the Legislative Council.

In 1908, in the wake of the water-rate agitation in Lagos, Dr. John Randle was at the forefront to launch the first Political Party in Lagos– The Peoples Union, which he served as the founding President with Orisadipe Obasa as Secretary.

In Dr. John Randle’s Will, he made generous philanthropic bequests to science and made provisions for medical scholarships. He endowed Professorial Chairs and donated his medical books as well as journals to the Fourah Bay College, now the University of Sierra Leone. Significantly, he established a Swimming Trust in his Will, with prizes, to encourage swimming among the people of Lagos as a sport and to abate drowning in the Lagos Lagoon.

Dr. John Randle’s legacy to humanity lies not just in being one of Nigeria’s pioneer medical doctors, a politician, a philanthropist etc.,but also as the man from whom many seeds have sprung up, who has left behind a multi-generational family with a wide kinship network of illustrious and patriotic citizens spread across Nigeria, West Africa and the diaspora.

Dr. John Randle has been memorialised by the nature of landmarks named after him, and books published in his honour by succeeding generations with a keen sense of history and purpose who regard him highly as a man of distinction worthy of emulation. “The interests of his people engaged his attention unceasingly….” (British Medical journal, August 4, 1928)

On the 27th of February 1928 Dr John Randle died at the age of 73; his life is to be measured not by the number of years he lived, but rather by the love shared, the memories made, the joy given and the blessings received. 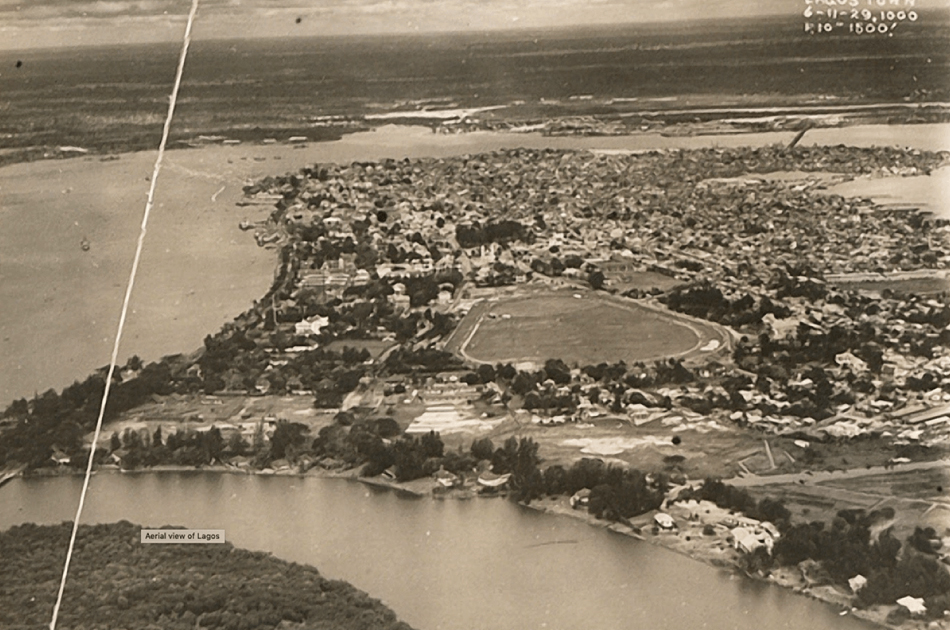 Designed by SI.SA Architects, the John Randle Centre for Yoruba Culture and History forms part of an urban regeneration project at the heart of Lagos Island, a part of the city steeped in rich history. The project seeks to restore a public swimming pool built in 1928 with updated facilities, and to create a centrepiece community building with a 1,000 square-metre exhibition gallery that tells the story of Yoruba history and culture through a journey from its origins, through present day, to the future. Both interventions are situated in a landscaped park, an homage to the 18th-century King George V Park, which was built over in the last century.

The architecture of the Centre takes it cues from traditional Yoruba architecture and craftsmanship, using visual metaphors to reflect the strong art and philosophical origins of the language and culture. The building form responds to its context in the shape of a fractal, rises from the earth and leans forward as a nod to Itesiwaju, reflecting the progressive nature of the Yorubas. The buildings are finished in a dyed Tyrolean, evocative of the mud aesthetic of old Yoruba architecture. A metallic screen across the face of the curved façade represents a weave, a time-honoured skill found in everyday Yoruba life. A green roof ties the building to the landscape, helps to reduce the building's thermal load and provides additional interactive outdoor space.

The Centre, pool and landscape will act as a catalyst for regeneration of the area and a nostalgic return of public recreation space to the heart of Lagos Island. The John Randle Centre will aim to engage the public with the richness of Yoruba culture and history; its impact through art, music, religion, language; its reach around the world through popular culture; and its significance in leaving a legacy for future generations.

“The British Museum has supported the development of the John Randle Centre for Yoruba History and Culture since its inception and is keenly anticipating the launch of this spectacular building at the heart of Lagos Island in 2021. This exciting cultural initiative will provide a vibrant new space to explore and celebrate Yoruba heritage, past and present, and will create further opportunities for positive dialogue and collaboration between Nigeria and the UK.” 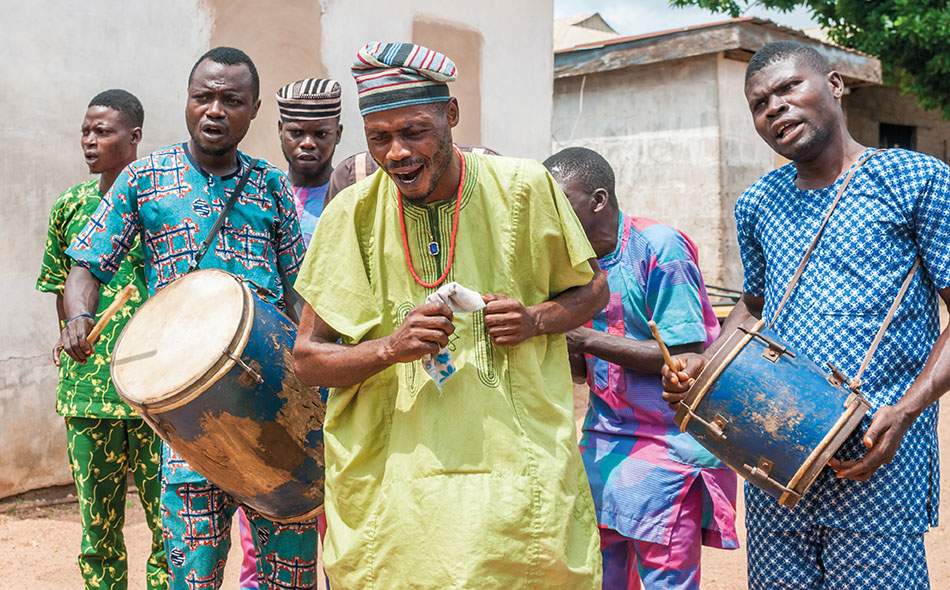 The John Randle Centre for Yoruba Culture and History will be an unparalleled experience in Lagos – a ground-breaking cultural attraction that will reveal to visitors the time-honoured story of Yoruba ethnicity – one of the most influential ethnicities in Nigeria. Yoruba experts and novices alike will be able to dive deep into the stories, myths and traditions of Yoruba heritage, encountering immersive experiences from the dynamism of Yoruba festivals to the rich visual culture of Yoruba history and ancestry.

The John Randle Centre will stand out as the first cultural centre of its kind in Lagos. As distinct from a museum, the Centre will provide a flexible, updateable space for learning programmes, art installations and live music events. Visitors will be thrilled, inspired and intrigued by the stories the Centre has to offer, regardless of their ethnicity. 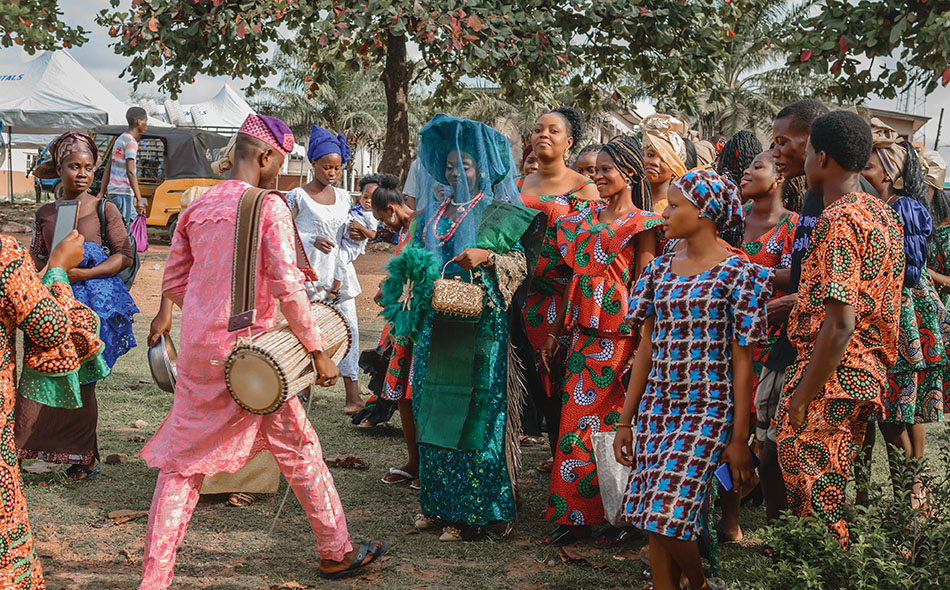 Yoruba culture is a crucial part of Nigerian contemporary culture. As Nigeria modernizes at an incredible pace, it is important to teach younger generations about how Yoruba heritage continues to influence musicians, artists and creative innovators in the present day. The Permanent Exhibition will celebrate the language, rituals, festivals, deities and ancestry of the Yoruba people at this time, and will ensure that the legacy of Yoruba culture and history is kept alive in Lagos.

The John Randle Centre will be a place of remembrance and reconnection for Yoruba and African people from Cuba, Brazil, Haiti, America and the Caribbean, as well as the rest of Nigeria, providing a vital injection of tourism to Lagos.

“The John Randle Centre is an enduring monument to Yoruba civilization, immortalizing Yoruba cultural history's vast grandeur and influence. The Centre’s exhibits will catalogue profound Yoruba knowledge, spirituality, and existence, providing a hallowed place for all to experience the glamour, splendour, and mystique of an unimaginable global treasure.” 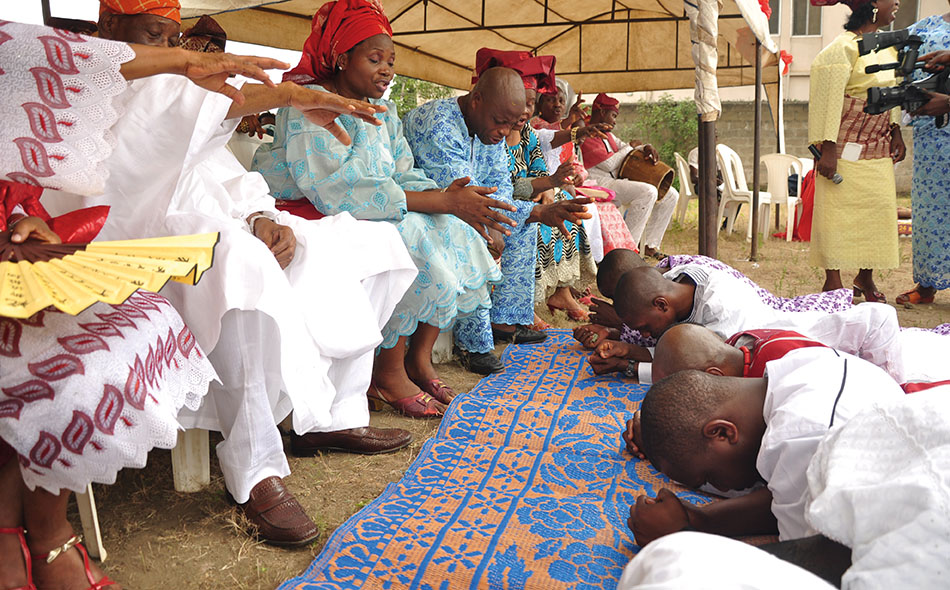 As the most populous city in Nigeria, Lagos is the perfect location to set the scene for a new cultural quarter, in which the John Randle Centre is a key offer. A city known for its deep connection to Yoruba heritage, Lagos now has a unique opportunity to celebrate its ties to Yoruba culture with the lasting legacy of a Yoruba Centre.

The frenetic energy, commitment to community, and diversity of identity in Yoruba culture are traits equally embodied by the city of Lagos. The Centre will be a fitting symbol of the multiplicity of identities in the metropolis.

Yoruba culture is a crucial part of Nigerian contemporary culture. As Nigeria modernizes at an incredible pace, it is important to teach younger generations about how Yoruba heritage continues to influence musicians, artists, and creative innovators in the present day. Celebrating the language, rituals, festivals, deities, and ancestry of the Yoruba people at this time will ensure that the legacy of Yoruba culture and history is kept alive in Lagos.

The John Randle Centre will be a place of remembrance and reconnection for Yoruba and African people from Cuba, Brazil, Haiti, America and the Caribbean, as well as the rest of Nigeria, providing a vital injection of tourism to Lagos.

“Literally and idiomatically, the presentation and display of Yoruba works should benefit from their rich oral and philosophical traditions. A gallery devoted to the elucidation (and even the dramatization) of the Yoruba concepts of orí, àṣẹ, aṣọ, Ọ̀ṣun and the "beginning" of the world using the oríkì paradigm. This is where mythology, archaeology and history meet and could set the stage for the understanding of Yoruba culture and history.
The guiding philosophy in the presentation of all works should be to attract and secure the interest of Yoruba culture bearers and not just the occasional non-Yoruba visitors/audience who expect to see a replica of the exhibitions they are accustomed to in Western museums.” 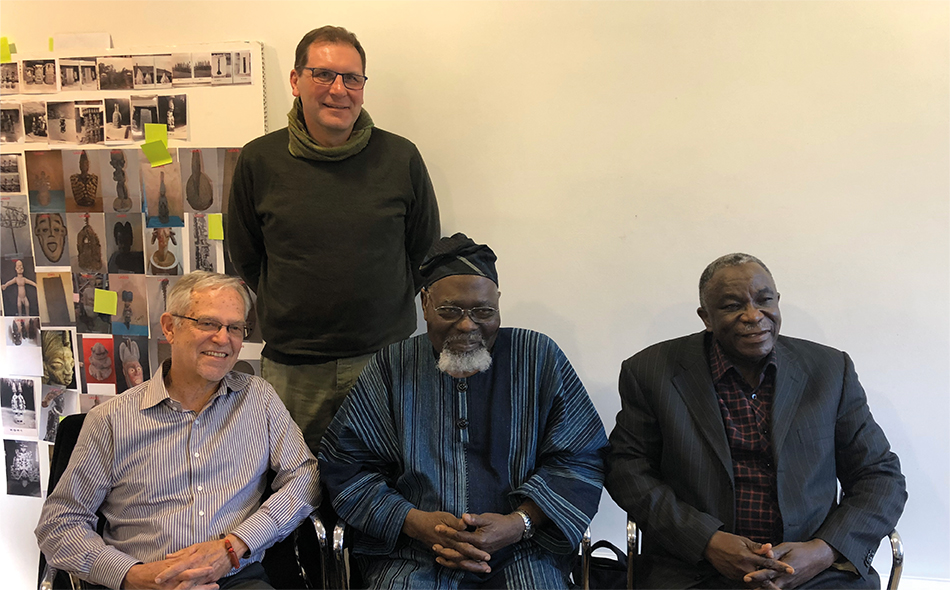 The John Randle Centre has been developed in consultation with an expert team drawn from around the world. The principal consultant is Rowland Abiodun, John C. Newton Professor of African Art at Amherst College, and formally Professor at the University of Ife. His book Yoruba Art and Language: Seeking the African in African Art provides the basis upon which the John Randle Centre has been organized.

Professor Jacob Olupona is Professor of African Religious Traditions at the Harvard Divinity School. He is an expert in Yoruba thought and philosophy.

Henry John Drewal is Emeritus Professor at the University of Wisconsin, Madison. He has, for many years, been the leading American scholar of Yoruba art and culture, organizing multiple international exhibitions.

Dr Will Rea was born in Ibadan and has spent many years working in Ekiti. He teaches at the School of Fine Art, History of Art, and Cultural Studies at the University of Leeds in the UK.